skip to main | skip to sidebar

While at Elmer and Deborah Torres's gift shop on Wednesday (8/17), Elmer gave me as a gift a copy of the "Classic Maria Martinez" DVD on active display in their store. I got hooked in watching the first few scenes of Maria's creating a pot. I don't know if Elmer knew that my technical background is ceramic engineering, so I watched the DVD at home with Birgitta on Saturday with two sets of eyes: those of engineer and poet.


I gained an entirely new perspective of making and firing specially prepared clay and its behavior under high crafted heat and skilled smothered quenching. I will watch that DVD many times!
Posted by Eugene at 8:27 PM No comments:


After leaving Mama Gonzales's wonderful dinner for the Sarov visitors and other guests, I walked in the dark to the Governor's office not far away to where my car was parked. Alas, my battery was dead! Again? The last time this happened was not long ago, just after dinner with our Hispanic friends in Chimayo' and for the same reason. Was there a message here, beyond my absent-minded memory, I mused.


On my way back to Mama's house to find help, I passed the house of a young man who had been at the dinner a few minutes earlier. He waved at me as I walked by to say he had enjoyed the story I had told about my father becoming a Russian cowboy in New Mexico in the early 1920s. I felt emboldened to tell him my battery was dead and he immediately followed me in his Lexus to give my old Honda a jump start. When my car fired up I asked if I could know the name of my rescuer. He was proud to say "Laurence Peña", a counselor at the pueblo. I told him I would post this event on my blog. He hoped I'd spell his name right. :) I have a hunch we will meet again soon.

As I left Mama Gonzales's home to walk the short distance to my car parked at the governor's office, Deborah Torres was just driving into the driveway and stopped to ask how the dinner and tour with the Sarov kids had gone. I gave her a brief update, but as we talked, a very old dream (11-12 November 1964) came to mind that I'd recalled the day before in the process of writing an email to her and husband Elmer. In looking the dream up in my journal to refresh my memory for details, I realized that this particular dream was part of a set of three that were my earliest requested dreams. They came the night after I had read Hugh Lynn Cayce's freshly published book Venture Inward, which offered suggestions for recalling dreams. In those days I was new to this subject and did not know how to understand or interpret them.

In the spontaneous process of telling the dream to Deborah this past Thursday, it began to take on meaning that I'd never before considered. The dream ends with a few ordinary American Indians (!), who casually begin practicing basketball by shooting baskets at one end of a typical indoor basketball court. The dream begins with me on a slippery slope near the top of snow-covered Mt. Majestic, beginning to slide backwards on the snow without skis, but turning around by the time I get to the bottom where there is a school gymnasium.

To describe the parallel outer reality in November of 1964, I was a new PhD with General Atomic Corporation, working as a materials scientist on nuclear fuels for atomic power reactors. Professionally, I was at the "peak" of my (majestic?) new career. We'll leave the rest of the interpretation and associations for later... :)
Posted by Eugene at 7:00 PM No comments:

After the Buffalo dance the Sarov visitors and I were invited to Myron Gonzales's mother's house for a delicious traditional dinner. Mama Gonzales's home is not far from the Governor's office and it was full of good cooking, family and friends. A favorite meeting place. It would be difficult not to feel comfortable there.


Myron and I got a chance to talk a little more about the LADDOF project, but somehow the conversation got sidetracked when they asked me about my background and I told the story of my dad coming west after the Russian Revolution/Civil war of 1917-20 to become a Russian cowboy in New Mexico in the mid 1920s.
Posted by Eugene at 6:30 PM No comments:

After former Governor Elmer Torres took the Sarov student visitors and me for a walking tour of the plaza and its surroundings, including an admiring look at the famous 750-year-old cottonwood in its midst, we returned to the governor's building to witness a courtesy performance of the American Indian Buffalo dance. Myron Gonzales met us in Native costume and introduced us to the young teenage dancers, two of which were the buffalo with horns.

Gonzales was also the drummer to whose beat the dancers moved. He explained beforehand that this dance was hundreds of years old and came from traditions that included the experiences of Plains Indians and their buffalo hunts.
Posted by Eugene at 6:00 PM No comments:

A day earlier, when I met former Governor Elmer Torres at his family gift shop on the pueblo plaza to ask him when I could meet the current governor, he suggested I meet with Governor Perry Martinez the next day in the governor's office, just before his scheduled 4:30 meeting with the visiting Sarov Sister City students. Elmer would introduce us. After we shook hands that Thursday, I gave Governor Martinez a copy of the Tree of Transformation flier. He had already seen the graphics days before when I left an earlier copy with his administrative assistant, but this time he read the text on the back. After asking me to say a few more words he suggested that I meet with Myron Gonzales, pueblo council member and resource specialist for cultural affairs.

Myron was in the next room briefing the Sarov students, after which briefing Elmer introduced us. Myron and I agreed to meet again soon for a more complete discussion of the project.
Posted by Eugene at 5:00 PM No comments:

When I reported for work this morning, the second day of school, imagine my surprise to be told by the transportation supervisor that the Los Alamos Public Schools superintendent was waiting for me on my bus! I wasn't expecting him for another two days. He was delivering on his promise to me made two years ago when he first came to Los Alamos and shook my hand at the kickoff breakfast for the new school year of 2009. At that time I made him aware that we had the same name (!) [Kovalenko is a Ukrainian version of "smith"] and that I was a school-bus driver.

Following that breakfast, in the Smith Auditorium, Dr. Schmidt presented to all employees his vision for the school during his tenure. Above is a pic of him and me with the new middle school principle Rex Kilburn at the annual breakfast on August 8, 2011.

If Our Hearts Are Right... was the slogan Dr. Schmidt presented in 2009 as his vision for LAPS. "If only this were more than rhetoric", I remember thinking back then and looked forward to discussing this very point some day when we finally met. That day came last Tuesday, August 16, 2011.


As we traveled on bus #139 to my first morning pickup on Los Pueblos Street, I mentioned this slogan: Was it more than rhetoric? He was quick to assure me that it was indeed sincere and was pleased that I remembered it. With that we launched into a most exciting, far ranging conversation, beginning with the subject of dreams as "pictures of the heart that parallel our waking life". Was he interested to discuss that subject with me sometime as applying to his slogan? That he was genuinely interested was heartening! In fact he pledged to arrange such a discussion soon over coffee, once these first days of school settled down. Our discussion would also include the mission of the Los Alamos Deep Democracy Open Forum, Inc.
I look forward to that day!

Posted by Eugene at 6:45 AM No comments:

Posted by Eugene at 3:00 PM No comments:

Posted by Eugene at 9:42 PM No comments:

God Light on Pueblo and LANL


As Birgitta and I drove home in late afternoon after a meeting with LADDOF director/adviser Jim Bradbury in Santa Fe, we noticed what photographers refer to as "God Light" streaming from the clouds over what seemed to be the San Ildefonso Pueblo area.

However, as we came closer to home in Los Alamos, the light seemed to have shifted. It was now clearly raining down on the Los Alamos National Laboratory!
Posted by Eugene at 4:30 PM No comments:

Event: 2 August 2011; Updated: 4 August 2011
Today's (Tuesday, 2 August) Skype conversation with LADDOF adviser Joseph Dillard in Berlin produced this photo of a tepee village not far from his home, which he photographed minutes after our conversation. Both of us were speechless after discussing my third visit to San Ildefonso Pueblo and he then mentioned what had been happening in the fields near Berlin for the last several weeks. Joseph was particularly impressed by Native American artist Alfred Aguilar's surprising, but illuminating comment about Native American art and their pots. In response to my question about how he would repair pots, Aguilar simply said, "One does not repair a pot."
I asked Joseph to summarize our conversation. He did so in an email and included this photo.
Here is Joseph's summary of our conversation:

Dear Eugene,
My first comment was in response to what you learned from Aguilar about pots, that to "repair" is to deny the life of a living thing. To think thus is to miss the meaning and purpose of this creative work. Even when it is broken or marred...

So Los Alamos is broken or marred. The indigenous peoples of Russia and the Americas are broken and marred. The nuclear scientists of Russia and the United states are broken or marred. Those "pots" are living things. Living things need to be respected and listened to, to hear what song they want to sing, just like "the wind sometimes finds one of those songs still in the clay and lifts it out. And carries it down ito the pueblo and across the plaza."

So maybe dreams and songs will be imprinted in this tree to weave together separate stories into a new, transformed, transformational narrative that doesn't need to repair, just to sing on the wind.
And that comment contains the second thought that I had, which was that perhaps the indigenous peoples of the Tree have contributions to make. Perhaps the Russian nuclear community has some contributions to make, both from representatives of the contemporary equivalent of Los Alamos and from some retired voices that have the wisdom of perspective to add...

That led to the third, which was that perhaps an interview of the Tree of Transformation would direct you on this path. And perhaps an interview by Jim of his dream tree might be important. And that might lead to dream sharing by members of the Pueblos and perhaps even some interviewing of their relationship to this project.
These are scattered ideas. Do not let them distract you!

Posted by Eugene at 3:32 PM No comments:


A picture is worth a thousand words.


Normally I place these posts to appear on the date of the event. This time, however, it is placed on the date of update to keep current on this now rapidly evolving enterprise.... 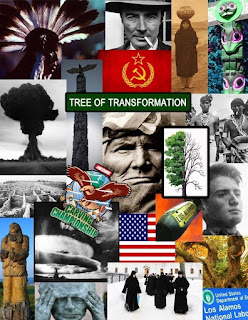 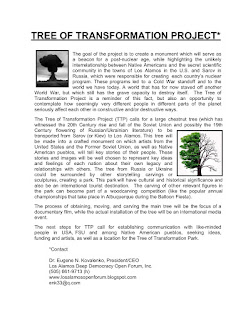